I had the opportunity this past week to speak at St. Francis Borgia in Washington, MO from where consequently both S. Amy and myself are graduates. My sister Mary Beth and a friend began a club called "Discerning One's Place" and they asked me to come share during one of their meetings. Not a real talkative group, but after a full day of school I can understand why. The time was actually very short, and I am not entirely sure what I said and if it even made sense, but it was great to be there. I think it is awesome that high school students (my little sister) would begin such a club and be thinking about how God is working in their lives and the decisions they are making. 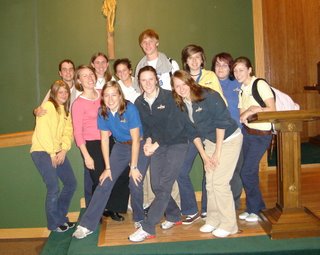 After my Sabbath Day on Friday Pat gave me some questions to pray with and reflect on over the weekend. They took me back through the last almost three months (I can't believe the year is nearly a fourth of the way through!) to today. It is amazing where I have been both physically and emotionally in such a short time. There were certainly some hard days in there and I'm sure there are more to come. But, with time, things have settled and relationships have formed and re-formed. I have learned so much and gained many new awarenesses already. It is like I sometimes describe the night I first decided to enter and talked to the vocation director: Christmas Eve as a little child, eager to see what gifts the next day will bring.

Saturday evening I went with some college friends, a boyfriend (not mine), and some of the sisters back to Fontbonne, from where I had graduated, 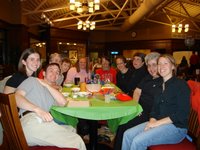 for a trivia night to support Dance Marathon and the Children's Miracle Network. The first category, Games, and a later category on Riddles were right up my alley. For example, "What is the only word in the English language that both begins and ends with u-n-d?" And, "If a butcher is 6 feet 2 inches tall and is 47 years old, what does he weigh?" or something like that. We did have the first place balloon at our table after one round, but not in the end. The Cardinals won that night, so who really cares.
Speaking of the Cardinals...tonight they are playing the Tigers for game 3 of the World Series here at Bush. I have never even been to a playoff game before, but a friend offered me a ticket for the game tonight! We'll have to bundle up, but I can't wait! Go Cards!
--Sarah